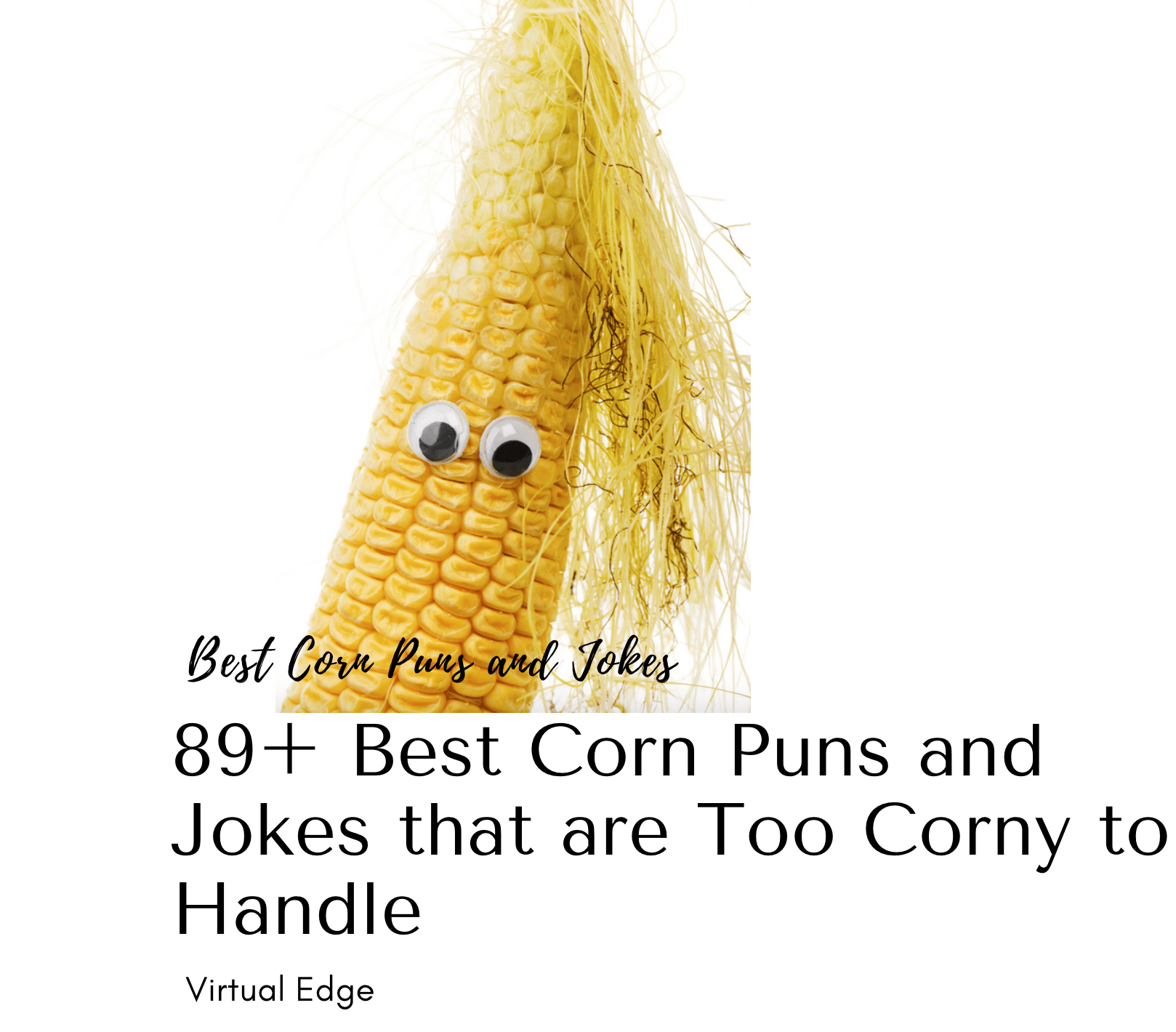 Corn is the plant that can be found almost everywhere, from fields to the dining tables, and movie theaters to fast food joints. All of these make corn puns a fantastic choice to put laughter in a family gathering. If you have been looking for corn jokes that are like no other, this is the right place for you. Read on to know more about one-of-a-kind puns based on corn that might make everyone around you won’t stop laughing.

Let’s admit that corn is one of the vegetables with multi-purposes which no one would ever get bored of eating. Corn mazes, Thanksgiving feasts, candy corn, and decorations all include this plant throughout the Fall festive. It’s also used in your grandmother’s corn stew. You also see it during barbeques in the summer or spring. So, you shouldn’t be surprised if corn puns also exist during those occasions.

A corn pun is closely related to corny jokes or dad jokes. However, have you ever wondered why most dads have a tendency to slip into some corny humor once they decide to have children? A professor and psychologist at the University of Rochester, Robert Pierce, explain why some dads really enjoy puns and yet even bad jokes may strengthen the relationship between a father and kid.

According to Dr. Pierce who also uses humor in his practice almost all the time, telling jokes can provide a fresh point of view like we are all in this together. If it is delivered at the right time, it can make some points gently.

The advantages of exchanging funny corn jokes or any types of jokes extend far beyond the realm of mealtime discussion. Below are some strong reasons why you need to start making a pun a regular habit:

Among all of the vegetables available today, corn is one of the plants that provide you the best chances to create some of the unforgettable corny puns. Corn is also one of the most essential plants in today’s world.

**_The mama corn wasn’t worried about her chubby son. “He’s not fat,” she said, “he’s just a little husky.”

**_I went to a party in a corn field the other day. I wasn’t expecting much, but it turned out to be a total corn ball.

**_I got lost for hours in a corn field, I thought I was going to be scared, but it was actually an absolutely a-maizing experience.

**_Some corn fell out of a lady’s grocery bag when she was walking down the street. I shouted after her but sadly my words fell on deaf ears.

**_The corn was worried he had a cough, his voice was getting a little bit husky.

**_Some corn, a carrot and a cucumber all fell into the ocean. Now they are all C foods.

**_The grumpy girl was not happy when she found out that her parents wanted her to make the corn for supper. “This shucks,” she sighed.

**_I don’t really like corn jokes. I find them a bit too difficult to digest.

**_The baby corn wanted a pet, so his mama decided to buy the baby a corn dog.

**_Someone told me they had a good corn pun. I live in a hut made from corn husks, so needless to say I was all ears.

**_Plain popcorn? I’m sorry but you can really do a lot butter than that.

**_The corn stalk decided to change careers. He went into a completely different field.

**_It was a nasty shock for the football team that practiced in the corn field. They got totally creamed.

**_I saw a naked corn cob the other day. I was shucked!

**_I could give you a list of corn loving baseball players, but you know Ty Cobb would be number one.

**_If you’re ever left alone in a corn salesman’s office, whatever you do don’t start snooping through his files. They are cornfidential.

**_Corn is a seriously good listener. It’s all ears.

**_The corn farmer won the Nobel Peace Prize for his extreme dedication to world hominy.

**_Some say that popcorn can be difficult to chew. I know where they’re coming from, there’s definitely a kernel of truth to that statement.

**_My pa just told me an extremely funny corn pun. It’s left me a husk of a person.

**_I took the grain to the granary and the corn to the coronary.

**_If you want to buy some pirate corn, it’s going to cost you a buccaneer.

**_I gave a huge sum of money to a corn farmer. I was a bit nervous, it was a major stalk investment.

**_The cornfield was relieved when it heard that it was going to rain. “Phew,” it said, “that’s music to my ears.”

**_The corn stalks decided to hold a ceremony to honor their favourite scarecrow. They wanted to congratulate him on being out standing in his field.

If you have never been to any corn maze, you don’t need to fret. It’s essentially just a path carved out of a cornfield. After reading some jokes about corn in this article, you will feel as though you have been to one. Also, don’t forget to share some laughs with these puns.

**_Why were all the corn stalks afraid of Jimmy? Because Jimmy cracks corn and he don’t care.

**_What kind of amphibian lives in a corn field? A: A corned toad.

**_What did the corn say when he received a compliment? A: Aw, shucks.

**_How much does a pirate pay for corn? A: A buccaneer.

**_What is corn oil use for? A: To stop corn from squeaking.

**_What do you tell maize after it graduates from high school? A: Corn-gratulations.

**_How do they describe the Iowa State fair? A: It’s like a corn-ival.

**_Where does corn go for vacation? A: Lake Earie. (Lake Erie)

**_What do you get when a truck runs over a corn cob? A: Creamed corn.

**_Where does ghost corn go to haunt people? A: Lake Eerie.

**_What is the most mythical vegetable? A: The unicorn.

**_What do corn stalk’s raise? A: Cornish Game Hens.

**_What do they call the best student at Corn University? A: The A-corn.

**_If corn oil comes from corn, what does baby oil come from? A: Minerals. What did you think I was going to say?

**_What did the farmer give his wife for Valentines day? A: Corn Rows.

**_How is an ear of corn like an army? A: Both have lots of kernels.

**_Who was the greatest baseball corn player of all time? A: Ty Cob.

**_Why was everyone letting the corn tell them what to do? A: He was the kernal.

**_Why did the corn stalk stop moving? A: It ran out of corn oil.

**_Why was the kernal comedian booed off the stage? A: All of his jokes were corny.

**_What do you get when you cross a werewolf and maize? A: A corn dog.

**_What was the name of the vegetable police squad that rode motorcycles? A: Corn CHiPs.

**_What do you call a cow who trips in a corn field? A: Corned beef.

**_What kind of corn can you eat but never grows? A: Candy corn.

**_Why is corn such a good listener? A: Because it’s all ears!

**_What do you get when you cross a corn cob and a cow? A: Corned Beef.

**_Why shouldn’t you tell secrets on a farm? A: Because the potatoes have eyes, the corn has ears, and the beans stalk.

**_What do corn cobs call their fathers? A: Pop corn.

**_What has many ears but cannot hear? A: A field of corn.

**_What do farmers do on Christmas eve? A: Hang the corn stalkings over the fireplace.

**_How do you describe Halloween corn? A: It’s eerie.

**_What do you call corn that’s been frightened. A: Screamed corn.

**_Why doesn’t anyone laugh at the gardener’s jokes? A: Because they’re always too corny.

**_I had a traumatic experience once, involving a corn tortilla and some mince beef. Until this day, I still can’t taco ’bout it.

**_The baby corn liked his mom, but he preferred his pop corn.

**_My friend came back from a shopping trip with a shirt with stalks of corn all over it. I asked if she got a good deal on her new crop top, and she heard me from all the way across the street. I tell you, her ears are brand new.

**_Corn is the one food you shouldn’t take on an aeroplane. It can be very dangerous if it makes your ears pop.

**_I swallowed a whole corn cob the other day because I thought it would be funny. It was a bad idea though, I got very corn-stipated.

**_My teenage son is being rationed to only one bowl of corn a day. He asked me for a second one, and I had to tell him no. He’s on cornantine.

**_There was a pair of cornstalks who were best friends. I’ve never seen cuter ear buds.

**_This might be seriously corny, but I think that you’re a-maize-ing.

**_I wanna tell you some of my funny popcorn puns, but I have a feeling you’re going to find them a bit too corny.

**_Should you eat corn when it’s fallen off of the stalk? Well, you maize well.

**_The egg couldn’t understand why the cornflakes didn’t like her corn puns. It was so cereals.

**_The farmer was embarrassed when I complimented him on his corn maze. He said, “Aww, shucks that’s sweet!”

**_Did you hear about the dog who was obsessed with stripping ears of corn? I think he must have been part husky.

**_Did you know corn has a favourite food? It loves cobb salad.

**_When I was in the corn maze I seriously thought I was being stalked. It was very earie.

**_The corn farmer had a knack for success. His tactic was to corn-er the market.

**_Did you know about the app that helps you grow corn in your back yard? It’s made in Sili-corn Valley.

**_You can buy corn at student unions. Uni-corn.

**_I found a single kernel of corn on the floor at the movies. I’ve never seen a unicorn before.

**_You have to be careful what you talk about inside a corn maze. The walls have ears.

**_This corn is pretty rough to touch. It looks like a job for Kernel Sanders.

**_The only vegetable that’s also a nut is a corn.

The majority of puns about corn you find on the internet are solely based on the word “corn”. But here, you will find a list of corn puns based on corn-related vocabularies. Read through this list, memorize it, and share it with others at the most appropriate moment.

85+ Thank You for Being There for Me Quotes and Messages

105 Best Eye Puns and Jokes That Are Cornea

95 Quotes About Change to Inspire and Motivate You