Duck puns are not hard to find, from clever to cheesy ones. If you are currently searching for some good laugh from funny duck puns, then you have come to the right place. These jokes and one-liners will make you the biggest jokester in your house and social circle, and give smiles to other person – albeit with some eye rolls included.

Duck is an extremely popular animal. According to the survey conducted in joint by Canadian Wildlife Service and U.S. Fish and Wildlife Service in 2019, the population of breeding duck is measured at 38.9 million. It’s a decreasing number from the previous years, but still 10% higher than the average numbers in the long-term.

Back to the duck puns, you may share them in-person or via online. However, to make it more special, here are some ways to put the puns on:

Sharing cute puns about duck if you’re an animal lover is a natural thing to do. You are about to find the list of the best jokes and puns related to ducks. All of the following puns are suitable for children so you may use them when your kids are learning about the animal worlds while entertaining them at the same time.

All of the best duck puns names are compiled here in this list, in one handy place. Use them if you want to share smile and laugh to your family and friends. They are also awesome to be used as captions on Instagram or status on Facebook to brighten up the day of your online friends.

Why did the duck get a red card in the football game? For fowl-play.

What did the duck’s friend say when she won lottery? “You lucky duck!”

Most ducks live in what state? Duckota.

What do you call a cow and two ducks? Cheese and quackers.

What do mallards eat at a baseball game? Quacker-jacks.

When is roast duck bad for your health? When you’re the duck.

Why do ducks lay eggs? They would break if they dropped them.

What did the duck say when he dropped the dishes? “I hope I didn’t quack any!”

What do you call a bird that can fix anything? Duck Tape.

What did the ducks carry their schoolbooks in? Their quack-packs.

What did the lawyer say to the duck in court? “I demand an egg-splanation!”

Why do ducks check the news? For the feather forecast.

Why did the duck end up in jail? He was selling quack.

What did the duck say to the banker? “My bill is bigger than yours.”

What snacks do ducks like to eat with their cheese? Quackers!

There were no more clients for the duck doctor. Everyone knew he was a quack!

Did the duck couple make plans for their night out? No, they decided to wing it.

What point of a view does a duck write a book in? Bird person.

What document did the duck politician write on his mouth? The bill of rights.

What does a duck get at the baseball game? Quacker jacks.

What is it called when a duck commits an illegal act in waterpolo? A water-fowl!

I went searching for ducks at the pond but only found other birds. It was a wild goose chase.

How did the duck parents know their duckling was a prodigy? He was eggcelent from birth!

What kind of egg does an optimistic duckling hatch from? Sunny side up.

What kind of egg does a calm and collected duckling come from? Over easy.

What sound does the son of a chicken and a duck make? Quack-a-doodle-doo!

Why was the duck put into the basketball game? To make a fowl shot!

What has fangs and webbed feet? Count Duckula.

Why did the duck go to the chiropractor? To get it’s back quacked.

What kind of TV shows do ducks watch? Duckumenteries.

Why did the duck cross the playground? To get to the other slide.

Did you hear about the duck who thought he was a squirrel? That was one tough nut to quack.

Why do ducks like campfires? They love seeing them quackle at night.

What do you get if you cross a duck and Santa Claus? A Christmas quacker.

Two ducks were waddling down a sidewalk when, suddenly, one tripped and fell. It got up and said to the other duck, “I’m sorry — I tripped on a quack!”

What do you call a duck that loves fireworks? A fire-quacker.

Why are ducks bad drivers? Their windshields are quacked.

What is a chick’s favorite drink? Peepsi.

What did the duck say to the corn it ate for lunch? You taste a-maize-ing.

What did Detective Duck say to his partner? “Let’s quack this case!”

What do pre-teen ducks hate? When their voice quacks.

What happens when a duck flies upside down? It quacks up.

Why did the duck get a second job? He had too many bills.

How do ducks talk? They don’t; they quack.

What do you call a cat that swallows a duck? A duck-filled-fatty-puss.

Where do tough ducks come from? Hard-boiled eggs.

Why was the teacher annoyed with the duck? Because he wouldn’t quit quackin’ jokes.

Why did the duck cross the road? He was tied to the chicken.

What do ducks have with soup? Quackers.

What do you call it when it’s raining ducks and chickens? Fowl weather.

What do you see when a duck bends over? It’s buttquack.

Why did the duck sleep under the car? Because he wanted to wake up oily.

Two ducks are swimming in a pond. One of them said “Quack quack.” The other replied, “I was about to say that!”

What do ducks say when people throw things at them? “Time to duck!”

At what time does a duck wake up? At the quack of dawn.

Why did the duck get detention? He couldn’t stop quackin’ jokes in class. 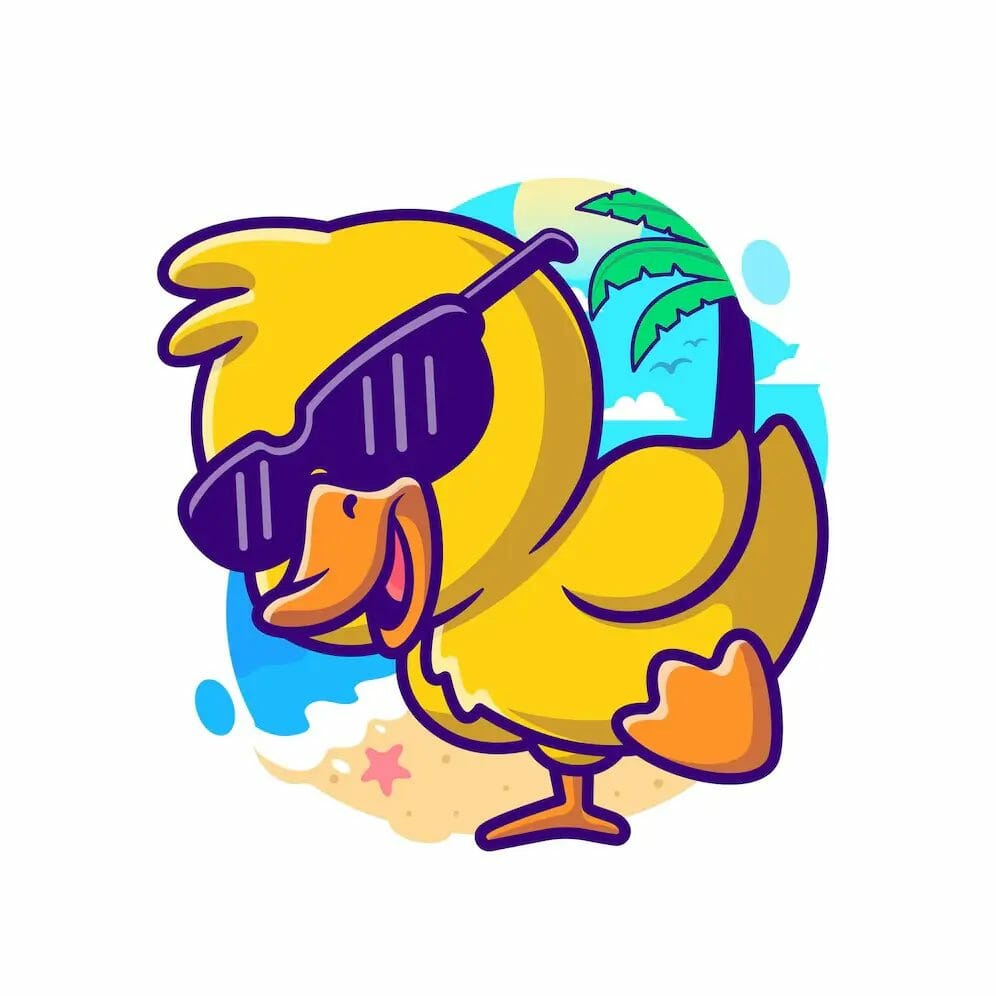 Animals are things that most children love the most. So, it is not a surprise that they will be enjoy to learn to share jokes that based on animals. These funny duck quotes, jokes, and wordplays will give the kids something interesting, but easy and simple to learn.

Why do ducks never grow up? Because they grow down.

What does a duck wear to a fancy event? A ducksedo!

What is storytime called when you read to ducklings? Ducktales.

Which musician do ducks listen to the most? Drake.

What do you call a duck that breaks into people’s houses? A robber ducky!

What when a duck has hiccups? It lays scrambled eggs.

What did the flying golf ball yell to the mallards in the pond? Duck!

Why don’t ducks make plans? They prefer to wing it!

Why do ducks say quack? Because they can’t say moo.

I pity the ducks who were pricked by the quack-tus and had to go to the duck-tor.

The mallards consulted the duck-tionary as they couldn’t get quacks.

I saw a baby duckling in the duck house, I guess she was nest-ling.

Daddy duck was watching a film called ‘Lord Of The Wings’.

The robber ducky stole the soap, so she was arrested in a fowl case.

Ducks are such creatures. Waddle I do without them?

Jokes related to animals and ducks are never going to run out. Whether you like witty or cheesy puns, these list below will be able to make you laugh and groan simultaneously – so keep on reading. 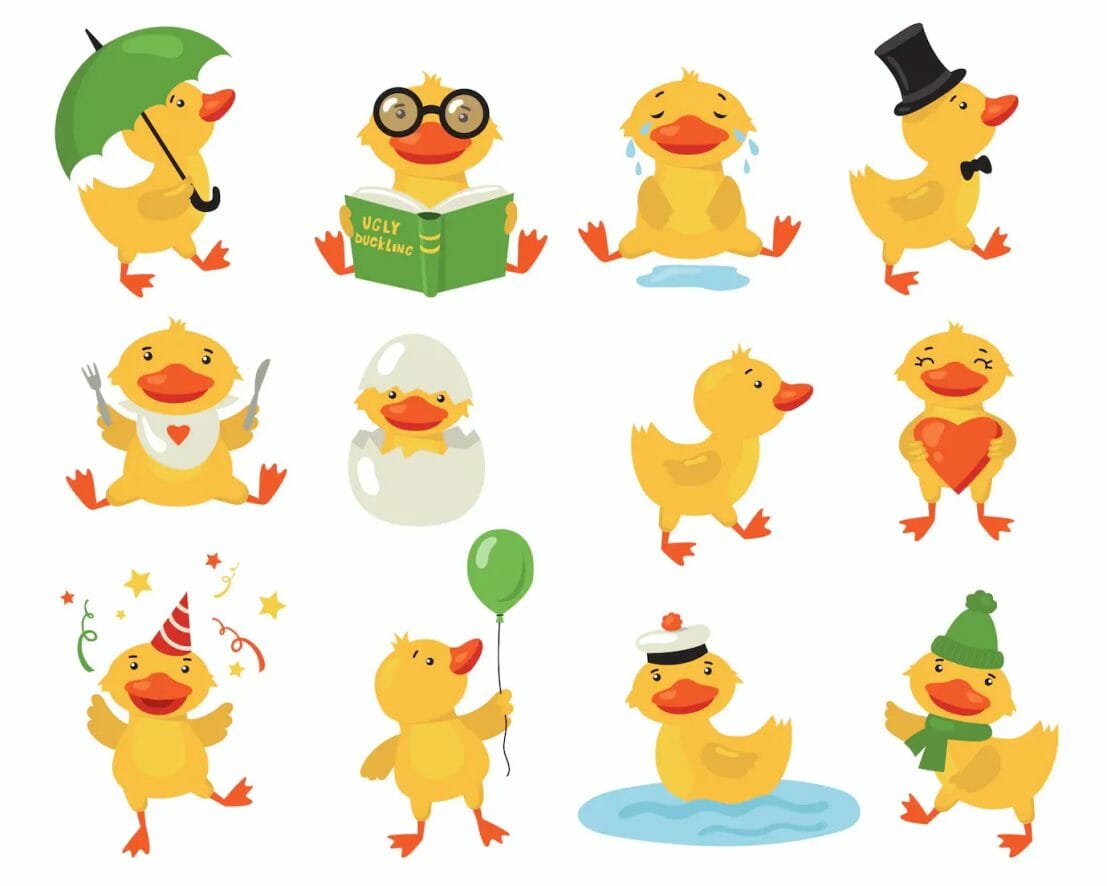 Ducks love surfing the internet; they use their webbed feet.

The Judge of the Duck Court asked the lawyers and the attendants to give her an egg-splanation.

The duck usually says, “Quack Quack,” but the duck was having hiccups, so she was saying “Quick-Quick” instead!

A cow and two ducks were really good friends, they were known as Milk and Quackers.

A detective duck was really suspicious about a case, so she said, “Let’s quack this case. ”

Some ducklings were playing hide and seek when the baby duck said, “beak-a-boo.”

A group of ducks planned to go out, so they were watching the news to get the feather forecast.

Two little ducks didn’t like their backpacks, so they were told to carry their school books in their quack packs instead!

The Buddhist duck visited the mo-nest-ry every day.

The lovely duck couple went to watch a movie, they watched ‘A-nest-hesia.’

Ducks fly to the south because it’s difficult to waddle so far.

The poultry farm owner made his duck a famous singer and the duck promises to keep on singing until his Bill Withers.

My ducks are really good at saving because they have their bills under control.

The rubber duck was shocked when she saw another rubber duck walking out of a beautician’s clinic and exclaimed, “I don’t believe you got plastic surgery done. ”

If a duck was crossed with a crocodile, it would make a quack-odile.

The duck-tective interrogated the victim ducks today, and they eventually quacked under pressure.

We fed a group of ducks in the backyard the other day, and it was really bread-taking.

The duck who lived on the 20th floor of the building wanted a pair of binoculars to get a bird’s eye view.

A set of six rubber ducks were packed in the box, and so they were called a box of quackers.

Donald Duck became an undercover operator and became a duck-tective.

A duck was scolded by the teacher as she was continuously quacking jokes in the class.

The poultry owner took their ducks to the duck-tor as they were sick.

The duck was declared out by the umpire in a baseball match because she did a fowl play.

The poultry farm owner said, “My ducks are very sincere; they are really ho-nest.”

All the rubber ducks were named, but it was very difficult to distinguish them in spite of their names because they are looked egg-xactly the same.

The interviewer asked everyone whether they had heard about the duck who thought she was a squirrel; they replied, “Argh! That was a tough one to quack.”

Papa duck decided to take his family for a family holiday in North Duck-ota.

The duck dropped some dishes and apologized, saying, ” I’m so sorry, I hope I didn’t quack any. ”

If a duck and an elf were crossed, you would be getting a Christmas quacker.

A duck went out to watch a movie, starring her favorite actress Duck-ota Johnson.

In a group of back-yard duck friends, one duck was left alone because she was said to have quack-itude.

The duck slept without keeping an alarm but don’t worry, she’ll get up at the quack of the dawn.

Puns are something that even when they are so bad, they are still able to make people laugh. After all the best jokes are about everyday mundane things, like the provided duck puns quack above. Don’t forget to share the good laugh with your closest ones as well by sending them the jokes.