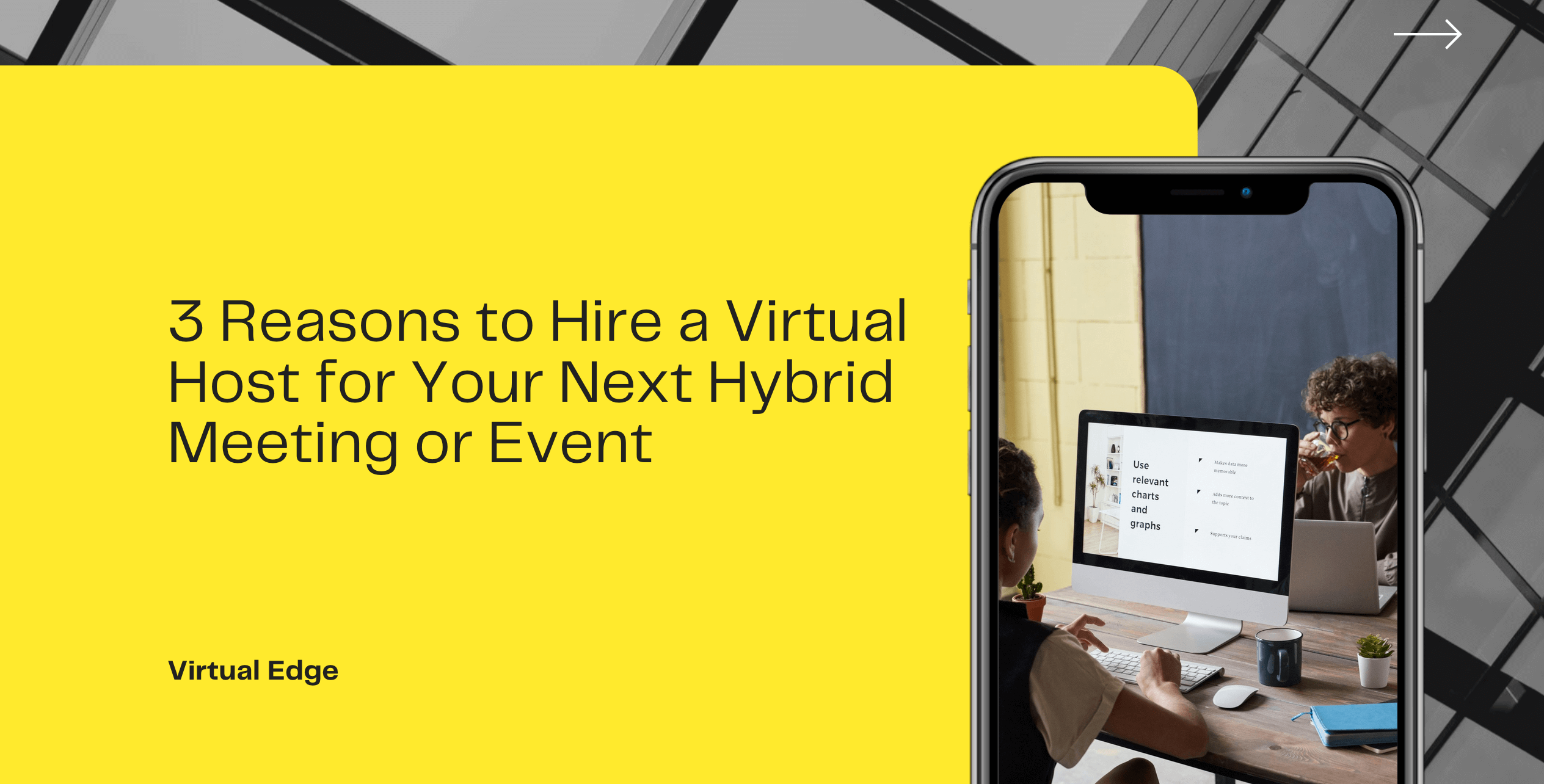 Nearly two years have passed since I wrote my first blog article about Hybrid Events. Since that time I have written more than thirty articles on the subject. I have also managed, at some level, around a dozen Hybrid meetings, and attended nearly as many, as a remote participant.

I am fascinated by the evolution of technology and development of “next practices” (rather than best practices) that follows it. In the Hybrid meeting space, one of the innovations that has bubbled to the surface has been the use of Virtual Hosts. (or Virtual Emcees)

For those of you not familiar with this term, a virtual host is an individual who’s job is to address the remote, or virtual audience at a Hybrid event. Their ongoing mission is to engage remote participants, creating opportunities for them to interact with presenters and f2f attendees.

Interestingly, the use of virtual hosts/emcees is so new there is no entry in Wikipedia addressing the topic. (Perhaps I should start one).

Picking the right person to be your event’s virtual host is as important as the concept itself. Two people who come to mind immediately, when I think about this subject, are Emilie Barta and Glenn Thayer. They are both talented people, with a passion for broadcast video work. And… they both light up the camera!

Emilie and Glenn are pioneers in the “Hybrid Events” world. They each have their own unique, but equally effective style of doing their job. I asked Emilie and Glenn to share their thoughts on the value of a Virtual Host/Emcee. Here’s what they had to say:

Emilie Barta — “The most important function of a virtual emcee is to be a conduit for the virtual audience and allow them to not only share in the experience, but to have an experience that is all their own. You (Event Professionals) have a responsibility to your virtual audience, especially if you are charging them admission.

Virtual audiences pay attention to how they are treated, and are quick to point out if they are being ignored or taken for granted. BUT if you have a virtual emcee who is always at attention, who is never scripted, and who goes out of their way to make the virtual audience feel welcomed, taken care of, and actively engaged in your hybrid event…you will have a virtual audience who increases the success of your event through word-of-mouth and social-media-sharing.”

Glenn Thayer — “A virtual host is the person that links the remote audience to the event itself. Not only does the virtual host relay information and report on happenings at the on-site event, they also act as the “voice” of the remote audience, asking questions and interacting with presenters and face to face participants on their behalf.”

Whether you refer to these professionals as virtual hosts or emcees is your choice. What’s most important is their expertise will add significant value and depth to your next hybrid event. Here’s why:

3 Reasons to Hire a Virtual Host

Get the F2F Audience & Presenters Involved — Before and after sessions, as well as during breaks, your virtual host may interview attendees and speakers. They will facilitate a conversation with remote participants, interspersing their own journalistic perspective into the dialogue.

The Voice of the Virtual Attendee — During sessions, using Twitter and/or the live streaming platform your host will field comments and questions from the remote participants and share them with the f2f audience and presenter(s).

If your organization has taken the plunge into the hybrid meetings realm, you really should strongly consider adding a virtual host/emcee to the program. While this support is going to impact your meeting budget, it is money well spent as the payoff will be attendee satisfaction and new customers.

Attendees will appreciate and remember your organization’s thoughtful approach to event design. More importantly many of them will attend your next year’s conference in the flesh as a result of your great work!

Hybrid Events — Whats All the Buzz?

5 Valuable Roles of a Tech Moderator for Hybrid Events