The farm can be one of the best places where you can find some worth-laughing conversations, including chicken puns. You will not be running out of duck puns, cow puns, horse puns, and bird puns, and these amusing puns are definitely a perfect match. Keep reading if you enjoy corny jokes or funny chicken puns that make you chuckle and groan at the same time. This collection of chicken jokes and sayings is ideal for you.

Have kids at home? Then, it’s your cue to share chicken puns with them as it is a fun way you can do to pass the time. Besides, it can encourage them to be more creative and playful, as well as exposes them to their sense of humor. By introducing them with a chicken pun, who knows they may turn out to be a budding comedian.

Give your kids a rubber chicken, teach them some of these funny chicken puns, and watch them make the whole room laugh. By teaching them young, their minds will be able to deal with wordplay’s complexity.

Later, your kids might obtain a roll-eye from their peers after delivering chicken puns names many people might not fund funny. But it’s actually good news as it could be a sign of higher intelligence. According to research conducted at the Medical University of Vienna, researchers found that some of the people from 156 adult participants could comprehend and appreciate dark cartoons, which showed that they have the highest intelligence.

Besides it requires high intelligence, there are also other things you will need to prepare before telling your friends your chicken-themed puns. Below are the quick tips to follow when making a witty chicken-based pun.

You are having lovely eating out at some establishments with your family, and one of your most hilarious family members happens to be enjoying a huge piece of fried chicken. It could be your best moment to show off some of your fried chicken puns. Running out of ideas for making new chicken-related punny jokes? You have come to the right page.

What do you get when you cross a chicken with a cement mixer? A brick layer!

What do you call a mischievous egg? A practical yolker!

How do you know if a chicken has been arrested? If it’s wearing hencuffs!

What is a chicken’s favorite landmark? Stone-hen-ge!

A chicken and an egg walk into a bar… The bartender says, “Who’s first?”

What do you get when you cross a chicken with a Martian? An eggs-traterrestrial

Why couldn’t the hen find her eggs? Because she mislaid them!

How long do chickens work? Around the cluck!

What is a hen’s favorite novel? Great Eggs-pectations by Charles Chickens!

Why did the Roman chicken cross the road quickly? Because she was afraid someone would Caeser!

Look out for my bag of chicks!

You are the wind beneath my chicken wings!

Chicks of the trade.

We are as chick as thieves.

We are really in the chick of things!

Hey, beautiful. I am chicken you out!

We are in this together, through chick and thin.

If you were a chicken, you sure would be im-peck-able.

To turn on the TV, just cluck on that button!

Her explanation clucked with me straight away.

I really can’t wing for losing!

Wow. You know how to lay it on chick.

You know blood is chicker than water!

I see you are up to your old chicks.

If you like it, then you should put a wing on it!

A chick of the light.

You’re just a one chick pony!

Every chick in the book. 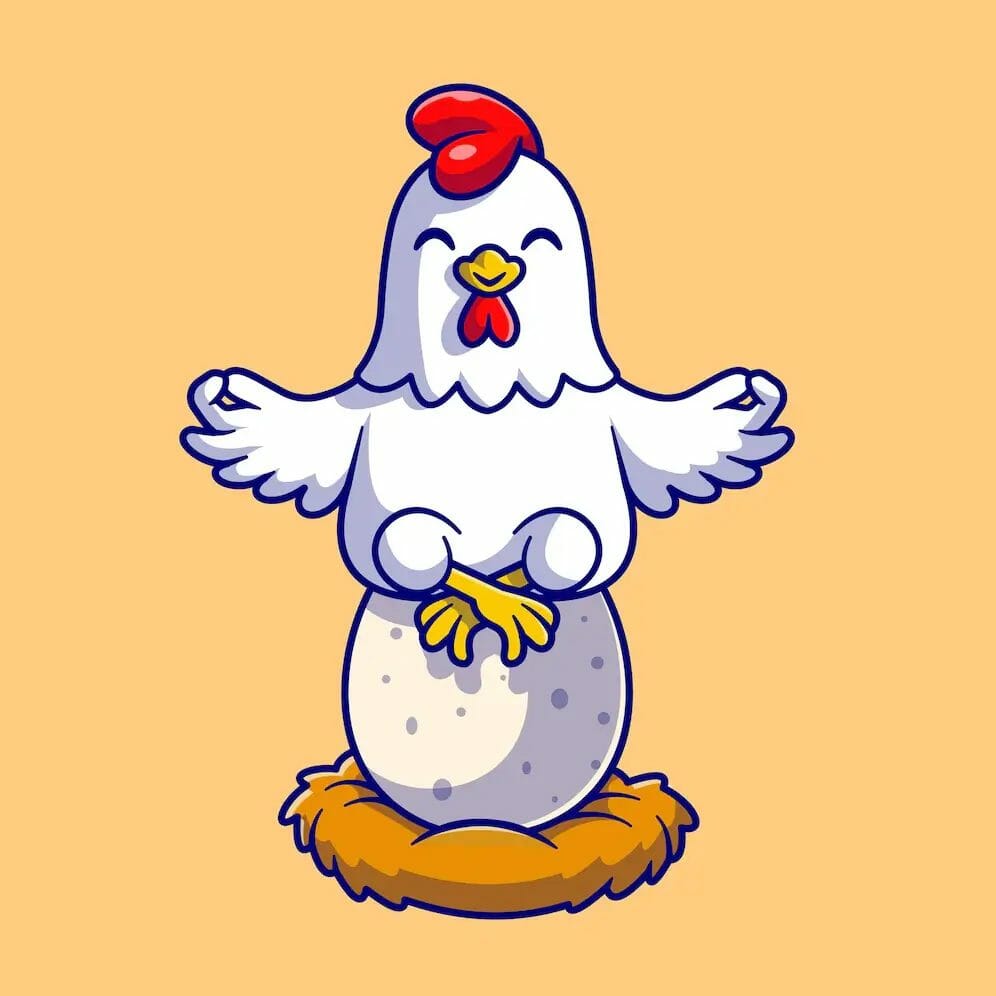 How does a chicken send mail to her friends? In a hen-velope.

What do chickens study at college? Egg-onomics.

Where’s the best place to find information on eggs? In the hen-cyclopedia.

What do you call a chicken crossed with a cow? A roost beef.

How do baby chickens dance? Chick-to-chick.

Where do tough chickens come from? Hard-boiled eggs.

How do you know if it’s too hot in the chicken barn? The chickens are laying hard-boiled eggs.

What do you get when you cross a chicken with a bell? An alarm cluck.

Which chicken is at the top of the pecking order? Attila the Hen.

What does a chicken need to lay an egg every day? Hen-durance.

Did you head about the chicken farmer who died under mysterious circumstances? The police suspect fowl play.

What do you get if you cross a chicken with a cement mixer? A brick layer.

What happens when a hen eats gunpowder? She lays hand gren-eggs.

Which dance will a chicken not do? The foxtrot.

Why did the chicken go to the seance? To get to the other side.

What do you call the outside of a hand gren-egg? The bombshell.

What do you call the door to a chicken barn? The hen-trance.

Why did the dinosaur cross the road? Because chickens hadn’t evolved yet.

What do you get if a chicken lays an egg on top of a barn? An eggroll.

How do chickens bake a cake? They start from scratch.

What is the most musical part of a chicken? The drumstick.

What do you call a group of chickens clucking in unison? A hensemble.

Why did the duck cross the road? To prove he wasn’t chicken!

Why did the chicken cross the road? The chicken next to him farted.

What eggs does an evil hen lay? Deviled eggs.

What do you call someone who steals a chicken? A chicken pot pirate.

Why did McDonald’s run out of chicken McNuggets? The farmer counted his chickens before they hatched!

Why don’t chickens like people? Because they beat eggs.

Why does the chicken go to Burger King? To see a chicken strip!

What day do chickens hate most? Fry-day!

What do you get when you cross a ghost with a chicken? A poultry-geist.

Why did the droid cross the road? Because a chicken programmed it.

What have you got to lose? Throw your hat into the wing!

What’s a chicken’s favorite book? How to Wing Friends and Influence People.

Why did the farmer cross the road? To get the chicken back!

What happened to the baby chicken that misbehaved at school? It was egg-spelled.

Why did the chicken cross the playground? He wanted to get to the other slide.

Why is it easy for chicks to talk? Because talk is cheep.

Why did the Easter egg hide? It was a little chicken.

What’s a hen’s favorite type of movie? A chick flick.

What do you get when you cross a chicken and a four-leaf clover? The cluck o’ the Irish!

How do chickens leave a building? They use the eggs-it!

What do you call a bird with no wings? A flap.

Why did Mozart hate chickens? All they say is, “Bach-Bach-Bach!”

Did you hear about the chicken who could lay eggs in the winter? She was no spring chicken.

What do chickens grow on? An eggplant.

What do you call a bird who’s too afraid to fly? A chicken!

Why don’t chickens wear pants? Their peckers are on their face.

Why does a chicken coop have two doors? Because if it had four doors it would be a chicken sedan.

Why do chickens hate winter? Because they always feel so cooped up!

Why did the Roman chicken cross the road quickly? Because she was afraid someone would Caesar!

Why did the chicken go to KFC? He wanted to see a chicken strip.

Why did the chicken cross the playground? Because she wanted to get to the other slide!

Why did the chicken cross the basketball court? He heard the referee calling fowls.

Which day of the week do chickens hate most? Fry-day

When the farmer died, all his chickens were sold to the highest bidder. They would have preferred to stay on the farm, but auctions speak louder than birds.

What does a chicken wipe its beak with? A henkerchief!

What does a chicken need to lay an egg every day? Hen-durance!

What do you get when you cross a dog with a chicken? A hen that lays pooched eggs!

What do you get when you cross a chicken and a four-leaf clover? The cluck of the Irish!

What do you get if you feed gunpowder to a chicken? An egg-splosion.

What do you call an excited chicken? Hen-thusiastic!

What do you call a chicken that crosses the road? Poultry in motion.

What do hens say on Halloween? Chick or treat!

What do chickens serve at birthday parties? Coop-cakes.

What did the chicken do when the light turned green? They egg-celerated!

What did one chicken say to the other after they walked through poison ivy? “You scratch my beak and I’ll scratch yours!”

The thief finally ran afowl of the law.

Is chicken soup good for your health? Not if you’re the chicken.

I hate winter. I always feel so cooped up.

I ate an omelette for breakfast but I’m still feeling peckish.

How does a chicken mail a letter to her friend? In a HEN-velope!

How do baby hens dance? From chick to chick!

How did the headless chicken cross the road? In a KFC bucket.

Did you hear about the chicken who could only lay eggs in the winter? She was no spring chicken.

Ever hear the one about the egg who got laid?

How do eggs run? They scramble!

How do you know if it’s too hot in the chicken barn? The chickens are laying hard-cooked eggs.

I had eggs for breakfast… But I’m still feeling peckish!

I have no idea how to raise chickens. I think I’ll just wing it.

Ignore him. He’s the guy who likes to ruffle everyone’s feathers.

Quit complaining and suck it up. I can’t listen to anymore of your squawking.

The owner of the fair’s winning rooster was sure cocky.

Those two are constantly egging each other on.

What did the baby chicken say when he saw his mother sitting on an orange? Dad, look what marma-laid!

What do chicken families do on Saturday afternoon? They go on peck-nics.

What do chickens grow on? Eggplants.

What do chickens study in school? Eggonomics.

What do you call a crazy chicken? A cuckoo cluck.

What do you get when a chicken lays an egg on top of a barn? An eggroll.

What kind of chicken grows on a tree? Poultry.

When do chickens go to bed? Half past hen!

Where are the most eggs hatched? In Chick-ago!

Where is the best place to find out about chickens? The hen-cyclopaedia

Why can’t a rooster ever get rich? Because he works for chicken feed.

Why did the chick disappoint his mother? He wasn’t what he was cracked up to be.

Why did the chicken cross the beach? To get to the other tide!

Why did the chicken cross the road halfway? She wanted to lay it on the line.

Why did the t-rex cross the road? Because the chicken hadn’t evolved yet.

Why do chickens lay eggs? Because if they dropped them, they’d break.

Why don’t chickens have computers? Because they aren’t very good with teggnology!

Did you know that chickens outnumber all other kinds of birds on this planet? This website also has the most chicken puns jokes compared to anyone else. So, if you are intentionally looking for entertaining chicken-themed punny jokes, you have arrived at the precisely correct place.