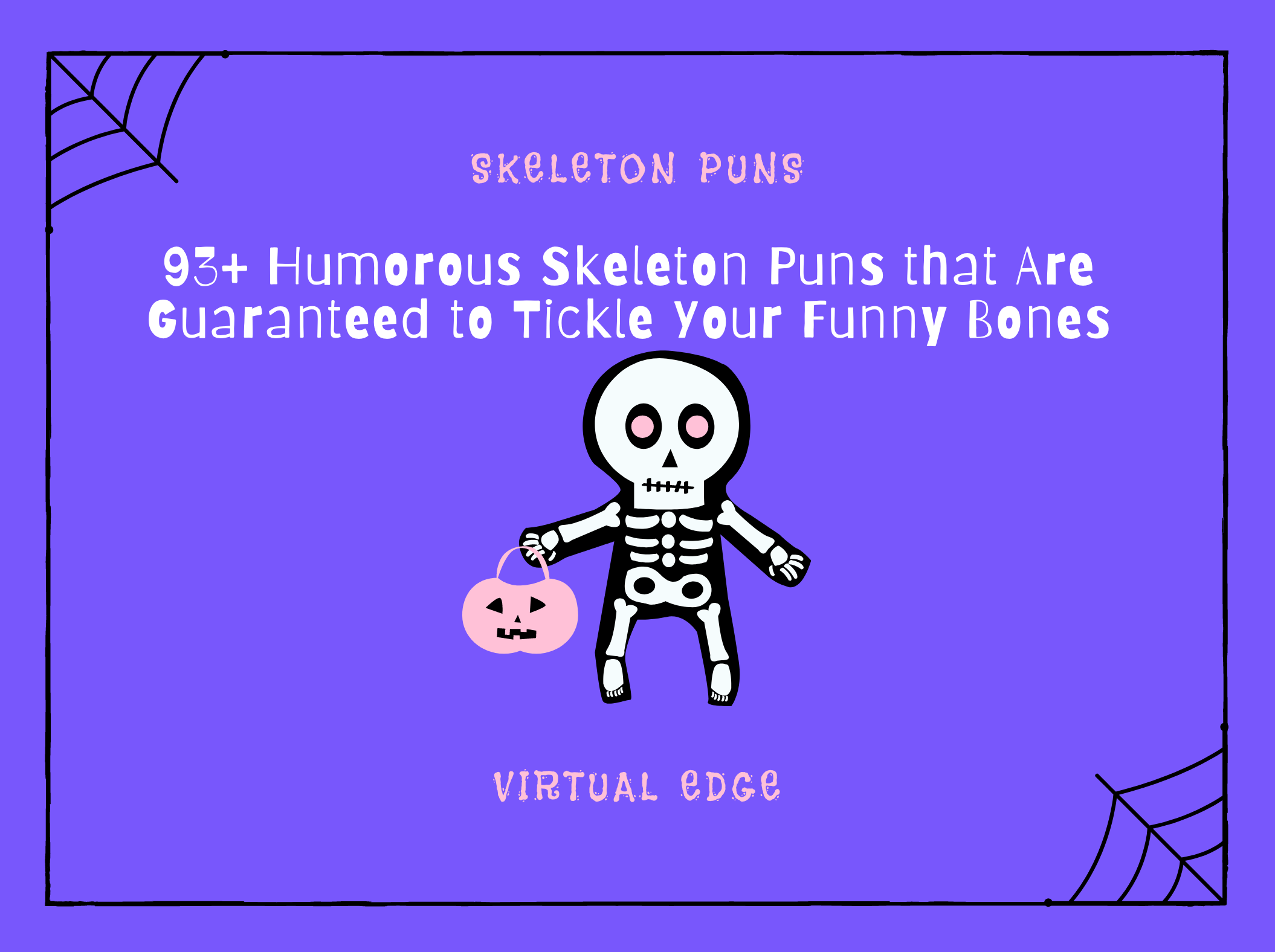 Skeleton might sound scary to some people, but for others it means fun! These skeleton puns are perfect for you who enjoy the sillier side of spooky things. This following skeleton puns list is especially useful to send and share during the Halloween, which is approaching closer by days.

Skeleton is a term that’s used to refer individual and fused bones supplemented and supported by muscles, tendons, ligaments, and cartilage. According to the data by The National Institutes of Health’s Osteoporosis and Related Bone Diseases National Resource Center, bone weight makes up for approximately 15% of human’s total body weight. That being said, you should pay attention more to the bone mass, the bone tissue amount in skeletons that determines bones’ health.

If you are planning to use spooky puns and jokes below on cards, here are some ways you can get started:

Now, skeletons might be one of the things that shown to lurk on the night, but they’re also possibly the funniest. Part of the reason why there are so many good skeleton puns out there is because they usually present as sympathetic or comic relief characters in the movie.

Skeletons are typically portrayed as silly, that’s why skeleton puns are the funniest to share during Halloween. Read out some of the best puns about skeletons below.

Hilarious Jokes and Puns about Skeleton

Even though skeleton might be quite creepy, especially if someone has one in their closet, it doesn’t make these skeleton name puns are less humorous. Use these funny skeleton quotes to share the fun and break the ice. You may find them to be useful as inspirations to send funny messages to your friend or as hilarious Instagram captions.

**_What was the skeleton’s favorite musical instrument? The trom-bone.

**_What song do skeleton bikers ride to? Bone to be wild.

**_How did skeletons send mail in the old days? The bony express!

**_Who is the most famous French skeleton? Napoleon bone-apart.

**_What song do skeleton crooks listen to after a heist? Bad to the Bone.

**_What was the skeletons favorite rock band? The Grateful Dead.

**_What kind of plate do skeletons eat on? Bone china.

**_Why did the skeleton go to the dance? To see the boogie man.

**_What do old skeletons complain about? Aching bones.

**_Why do skeletons hate the winter? Because the cold goes right through them.

**_What do boney people use to get into their homes? Skeleton keys!

**_Why did the skeleton cross the road? To get to the body shop.

**_Why did the skeleton pupil stay late at school? He was boning up for his exams!

**_Why don’t skeletons like parties? Because they have no body to dance with.

**_When does a skeleton laugh? When something tickles his funny bone.

**_What’s a skeleton’s favorite type of plant? A bone-zai tree!

There are 206 bones in adult human body and they have different function each. You need three of bones to thrive in life: back bone, wish bone, and funny bone. These best skeleton puns are guaranteed to tickle your funny bones and give you a good smile or laugh.

**_The best way to describe a skeleton that is having the best time of his life is probably by saying that he is having an osteoblast!

**_I saw a skeleton starting a fight. So I asked the reason why, to which he replied that he had a bone to pick!

**_I saw a skeleton who was a famous stand-up comic. All his jokes were extremely humerus!

**_Skeletons are known to be extremely lonely in general because they have no body!

**_Skeleton doctors who practice osteopathic medicine are known to bring spare ribs to a potluck!

**_The criminal skeleton was arrested by the police and was imprisoned in a rib cage!

**_Once, a skeleton took a stroll in a wild jungle, and he was chased by a couple of greyhounds. He marrowly escaped the dogs!

**_A group of skeletons went to a gala dinner. They began their feast by saying bone appetit!

**_The skeletons that were given the job of finishing the task were unable to complete it on time because it was a skeleton crew!

**_Skeletons are known to get quite sick on days that are especially very windy because the wind goes right through them!

**_Skeletons have an amazing trait of not losing their calm under tense moments because no one gets under their skin!

**_There was a skeleton who always failed all his examinations in school because he was a numskull!

**_Skeletons love to be stylish and cool. They are hip-ster.

**_When the skeleton went to school, he learned all about his bones in the osteoclass!

**_There was a skeleton who always found his spine to be very funny. Whenever it was funny, it started cracking up!

**_Legless skeletons are asked to avoid arguments because they apparently don’t have a leg to stand on.

**_The skeleton found it extremely hard to get out of bed as he was bone-tired!

**_There is a special train service to deliver the mails of all skeletons. It is called the bony express.

**_People can understand when a skeleton lies. They are bad liars as everyone can see right through them.

**_The detective skeleton caught the criminal just from a trivial hunch. He claimed he could just feel it in his bones.

**_The skeleton loved traveling and went on trips that included adventure sports like paragliding and cliff diving. He was just bone to be wild.

**_he skeleton was sick, so he went up to his doctor and said, “I think I am a little sick, I have femur”!

**_Upon producing very good results at work, the efficient skeleton was given a bone-us by his manager.

**_When the little skeleton was not studying for his examinations, his father scolded him by saying, “Why are you not boning up for the exams?”

**_Once, two skeletons were having an animated conversation. When one started stretching the truth of the story, the other said, “Is that a little fib-ula?”

**_There was a skeleton who was a botanist. His favorite kind of tree was a bone-zai tree.

**_There was a skeleton who always lied to his friends. So his friends named him ‘phoney-ba-boney’!

**_A skeleton went to the hospital to donate his body for medical sciences. So the doctor asked him to spine on the dotted line!

**_A scared skeleton always finds it hard to look at other skeletons because he doesn’t have the stomach to see it!

**_The skeleton saw a man constantly following him for a couple of days. So he went up to that man and asked if he was spine on him.

**_The kid skeleton was scolded by his parents because he pretended he was sick so that he couldn’t go into skull.

**_Whenever skeletons need to repair their cars, they take them to the body shop.

**_While reading Hamlet, a skeleton’s favorite line is ‘Tibia or not Tibia’!

**_Skeletons have a funny way of celebrating their favorite holidays. They just eat, drink and be very scary!

**_Whenever skeletons go to the church for mass, they can never play the music as they have no organs.

**_The skeleton got a job in the jazz band. He has been recruited as the trom bone player.

**_The little skeleton was constantly picked on by other kids in school, and he couldn’t do anything because he didn’t have the guts.

**_The skeleton loved cracking jokes, and when others smiled, he used to laugh and say, “I think I did tickle your funny bone”.

**_The dissimilarity between two skeleton teachers of school is one is funny and the other one is extremely sternum.

**_The skeleton preferred to bone up on the truths for the big test.

**_The skeleton was aware about everything that was going to happen next because it was felt by him in his bones.

**_A cabernet wine with an entire body was ordered by the skeleton because he didn’t get any.

**_A melodious solo riff on the polished sax-a-bone of the skeleton was played by the skeleton.

**_Why didn’t the skeleton move his body rhythmically to the music? because he is not alive, you stupid person.

**_What will be ordered by a skeleton order at a cafe? Spareribs.

**_What is the reason for the skeleton for not being so bad at cutting down trees? Because skeletons are LUMBARjacks.

**_Everybody named the skeleton a bonehead and he was absolutely cool about it.

**_The hall exhibition of skull-ptures of the skeleton was canceled by the skeleton himself because his soul was not really in it.

**_Where did the skeleton get the information about rain on Halloween? It was felt by him in his bones.

**_The skeleton couldn’t be able to keep anything neat because his bones are lazy.

**_Certainly that skeleton brought his craving to the feast—and some extra ribs.

**_Skeletons are outstanding standup comedians when their funny bones are used by them.

**_Why didn’t the skeleton move his body in a rhythmic way at the Halloween gathering?

**_The mode of travel that skeleton pilots like the most is waiting for it, the skelecopter or the scareplane.

**_The skeleton had no body with whom he can do the movement in a rhythmic way.

**_What does the skeleton culinary expert say when a meal is served to you by him? Bone Appetit.

It’s been awhile since skeletons are considered to be scary because of their funny and endearing portrayal in popular media. The skeleton pun list below might be cheesy sometimes, but they also can make someone laugh and lift up their day a bit. Anyone can use a bit of humor to go through their days, especially your loved ones.

**_What do you call a skeleton with no friends? Bone-ly!

**_What do you call a skeleton who went out in the snow? A numbskull!

**_What does a skeleton use to call his friends? A tele-bone.

**_Why did the skeleton run up the tree? A dog wanted to eat it’s bones.

**_Why do skeletons like to drink milk? Because milk is so good for the bones!

**_Who won the skeleton beauty contest? No body.

**_Why didn’t the skeleton eat spicy food? He didn’t have the stomach for it.

**_What do you call a skeleton who uses a door bell? A dead ringer.

**_How do skeletons say hello? Bonejour.

**_Why did the skeleton have to goto church to play music? They don’t have any organs!

**_Why didn’t the skeleton go to the scary movie? He didn’t have the guts!

**_Why are skeletons so calm? Because nothing gets under their skin.

**_What do skeletons order at restaurants? Spare ribs!

**_How did the skeleton know it was going to rain? It could feel it in it’s bones.

**_What did the skeleton say to the vampire? You suck.

**_What do skeletons say as they head out to sea? Bone voyage!

**_What do you call a skeleton who won’t work? Lazy bones.

**_Who is the most famous skeleton detective? Sherlock Bones.

You possibly have heard some of the skeleton pun names or jokes before. However, the list above is taking it to the next level. It has everything that you are looking for in a pun, whether you want funny, stupid, great, or hilarious ones.