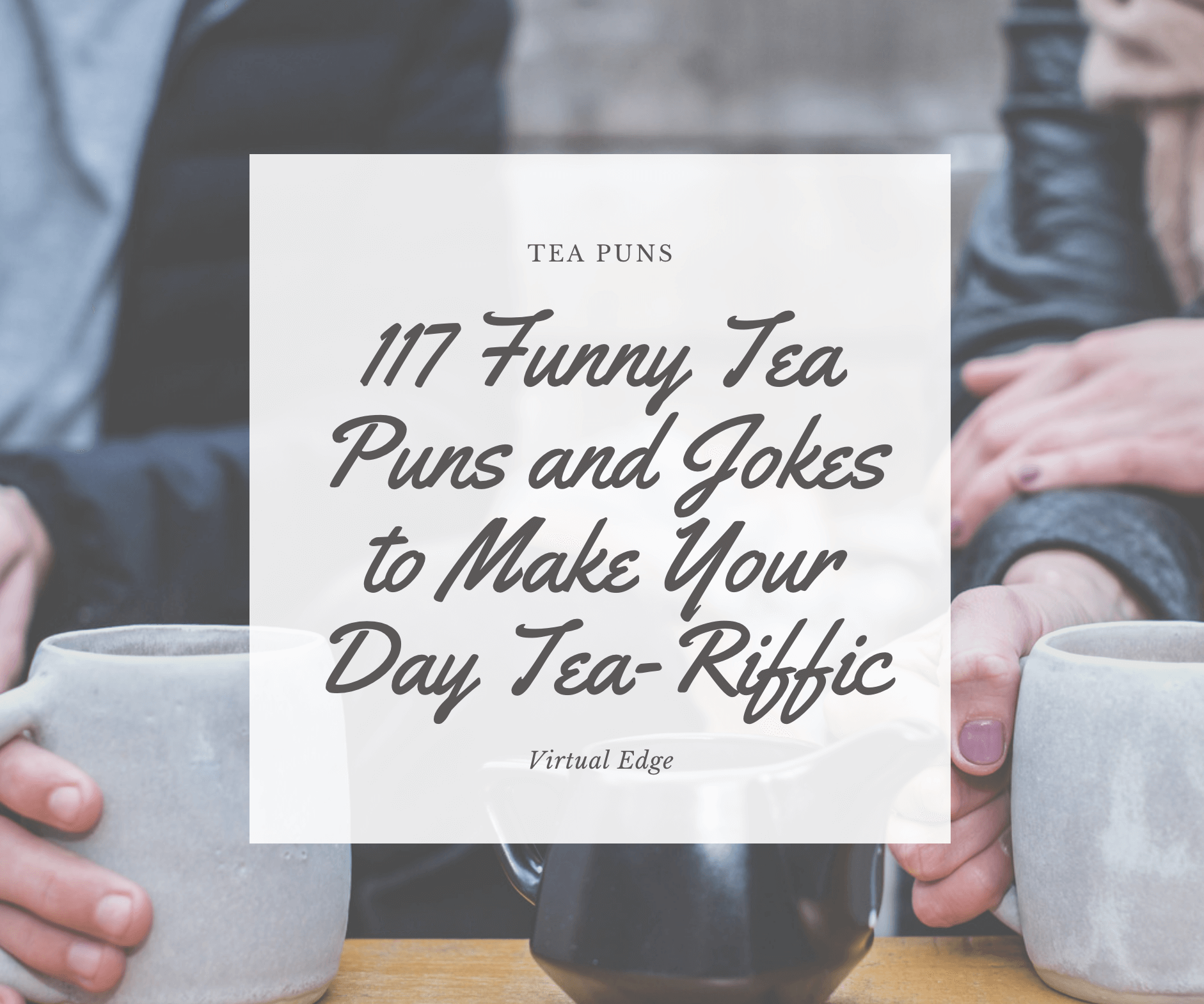 Tea puns are common to be found among tea-drinkers. They do love the beverage and everything they do revolves around the tea. Well, tea is one of the most common beverages around the world. There are more than 2 billion tea-drinkers in the world, and they come from different regions. This is the reason why tea is pretty much still popular to these days.

Moreover, tea also comes in different variations, including the popular boba tea these days. For this reason, you will find the chewy tea beverage very common to be found, and hence the existence of boba tea puns used all over the world. According to recent polling, more than 60% of tea drinkers these days have tried and preferred boba tea.

If you want to know the countries where tea is the most common beverages, you can read this list below. It will show you where those bubble tea puns and all the tea jokes will work the most. These are the countries where it is common or even customary to drink tea in daily basis. If you are not a tea-drinker, it is better for you to think twice for visiting these countries, though.

For you who need to find out the list of funny tea puns or the ones with romantic tone, find the list below. It has everything you need to know.

These are some funny tea puns that you need. They will make people laugh for sure, and you need this to put a big grin on other people’s face.

**_Coffee’s dangerous, but tea is not. It gives you a sense of safe-tea.

**_This teabag got mad that its friend got brewed first. I told it to stop being sal-tea.

**_This teabag keep jumping out of the pot. It’s being feis-tea.

**_The hipster burned his tongue. He drank tea before it was cool.

**_I picked up my friend’s coffee by accident then put it back. It wasn’t my cup of tea.

**_I went into the kitchen last night and heard all this noise coming from the tea caddy. There was a tea party going on.

**_A teabag’s college friend told her a longwinded story about people she didn’t know. “Cool story, brew,” she said.

**_This bag of leaves is a successful college professor. It got tenure as facul-tea.

**_I dropped my wallet last night. The cashier at the tearoom gave it back. Some people have so much hones-tea.

**_How did the yerba maté become a famous motivational speaker? She was full of positivi-tea.

**_Why was one teabag jealous of the other? It was green tea.

**_Some coffee and some tea had an argument. The green tea walked away, but the boba decided to milk the situation.

**_The tea wanted to buy its mom a gift, so it went into a florist. “Bancha flowers, please,” it said.

**_This South American green tea was brewed by an angel. It’s a matcha made in heaven.

**_A cup of yerba became a sailor. As it came aboard the ship, the captain shouted, “Ahoy, ma-tea!”

**_What did the green tea say when its friend asked why it hadn’t got a birthday card? “But I Sencha card already.”

**_Why did the coffee tell the matcha to be quiet? He was being too chat-tea.

**_A new customer wasn’t sure whether she’d like the spicy tea. The barista said that if she never chai’d, she’d never know.

**_I got to school today and found a cup of chai at the front of the classroom. It was the substitute tea-cher.

**_Why didn’t the tea introduce itself at the party? It was a little chai.

**_The chai, the matcha and the oolong were all making fun of the pu-‘er. I told them not to teas-e it.

**_What’s the difference between a hot spicy drink and an exercise class? One’s chai tea, the other’s Tai Chi.

**_The chai’s been grumbling about how long the kettle takes to boil. It finds the waiting very tea-dious.

**_The server at the tea shop got a bad review. The boss said he needed to chai harder.

**_Why did the infuser break up with the tea leaf? Their relationship was strained.

**_Why did the teapot always win in raffles? Pot luck.

**_The teapot started an office job. It was hanging out in the break room when a colleague asked for hot water. “I don’t urn enough for that,” said the teapot.

**_A teapot became a movie critic and all the directors are terrified him. He’s absolutely brew-tal.

**_They want to throw out the big tea pot, which is very sad. Samovar best teas come from that urn.

**_This hillside is covered in people drinking tea. It’s a very steep slope.

**_I think I may have had this tea before. I’ve got deja brew.

**_The teapot sent a Valentine to the tea leaf. He said she was brew-tea-ful.

**_What did the teabag say when he got put back in the water? That was a steep too far.

**_What did the tea leaf’s mom say at bedtime? Steep tight.

**_When I told the barista she gave me the wrong drink, she quickly became all missed-TEA-eyed.

**_Are you even aware that four of the last five Presidents were all left-tea.

**_You are like a family to me. You don’t have to do any formal-tea in my celebration!

**_One steep forward, two steeps back

**_Do you think it is okay to STEEP together on the first date?

**_The only dinosaur who loved drinking tea was the TEA-REX.

**_People who are full of ambition often have loft-TEA goals.

**_My girlfriend is such a cu-tea pie!

**_Let’s get this par-tea started!

**_I am really sick and tired of dealing with flir-tea boys.

**_Defense lawyers are only afraid of one particular type of tea, the GUILT-TEA!

**_Everything I brew, I brew it for you.

**_I have never ever done such a tea-dious task in my life.

**_If you decide to invite the Queen of England over for a drink, consider it to be royal-tea.

**_This is one of most tea-riffic places I have ever visited.

**_Unless I drink 10 cups of tea everyday, my creativ-TEA doesn’t comes out.

**_It’s because of your hones-tea, I madly and deeply fall in love with you.

**_Why on the earth you don’t use seat belt? It’s for you own saf-tea.

**_This turkey and chicken is so tas-tea! I am going to gobble them all alone.

**_The key for a great longev-tea is regular exercise sessions day in and day out.

**_Would you please stop teasing me all the time? Now it’s irritating me.

**_When it comes to drinking tea, you really are a tea-riffic person.

**_I wish boun-tea-full of joy in everyday of your life.

**_What do you call a lady who loves tea and is beautiful? S-tea-ning.

**_He is 50 years old yet he looks like a 25 years old bloke. This man is the perfect example of longev-tea.

**_Wherever I find hot water, I beg for tea bag.

**_There is no problem in the world that a person with strong mental-tea can’t fix.

**_What do you call a person who supports social quality? A lef-tea-ist.

**_I suggest you to not touch the sharp side of the pencil. It’s too pointy.

**_I have yet to find a highly knowledgeable tea-cher like you who can explain the complicated topics in the simplest manner.

**_I really don’t want to see your nas-tea side again.That was so gross.

**_Whenever I look at my girlfriend, only when thing pops up in my mind; she is such a hot-tea.

**_The day I get over from procras-tea-nation is the day I will achieve all my dreams.

**_You shouldn’t cook often because you make the food way too sal-tea.

**_My youngest child is the naugh-tea-ist of all children.

**_The one and only reason you are my bes-TEA is because we both love to drink tea outrageously.

**_One of the most dangerous dinosaurs ever know to human kind is TEA-Rex.

**_The reason I meditate every single day is because it renders me tranquili-TEA.

Meanwhile, if you need love tea puns to show off your romantic side, copy all these texts below. These are some lovey-dovey puns related to the beloved beverage.

Tea is cute in some ways, and this is why cute tea puns are common to be found. Here are some of the cutest puns about the tea for you.

**_What do you call a Queen’s infused leaf beverage? Royal tea.

**_Why did the teapot get detention? It was being naugh-tea.

**_What political party gets everyone’s vote around 4pm? The tea party.

**_What do you get when a teabag meditates? Sereni-tea.

**_Why did the teacup get fired from the palace? It kept spilling the royal tea.

**_Why did the tea get mistaken for toothpaste? It was min-tea.

**_What do you call it when you put off doing your homework to get another tea? Pro-caffeine-ating.

**_Why did the woman refuse to drink the tea served at the cafe? It wasn’t her cup of tea.

**_How does Moses make tea? Hebrews it!

**_Why does the man put a blindfold on whenever he makes tea? Because a watched pot never boils.

**_What kind of tea is really hard to swallow? Reali-tea.

**_What did one tea leaf say to the other tea leaf? “This is a fine mesh we’ve gotten ourselves into!”

**_Tsunami invited Cyclone, Earthquake, and Drought to a tea party, but no one came. Tsunami had a silent tea.

**_What does a camel ask when they give you a cup of tea? One hump or two?

**_Why is lemonade bad? Because it’s not-tea by nature.

**_Why don’t hipsters drink iced tea? Because they drank tea before it was cool.

**_Why type of tea does Queen Elizabeth love to drink? Immortali-tea.

**_What do you call a new material made out of lemons and tea leaves? Arnold Polymer.

**_I just sorted out all of my tea bags and color-coded the containers. It was really tea-dious.

**_What type of tea does Uncle Sam drink? Liber-tea.

**_What do workers in a tea factory never get? Coffee breaks.

**_Patient: “Doctor, I have pain in my eye whenever I drink tea.” Doctor: “Take the spoon out of your mug.”

**_What do you call a small child who can’t drink much tea? A tea-toddler.

**_What do you call a vehicle that comes with a dispenser that makes sweet tea forever? It’s an Infinite-tea.

**_Where is the most fertile region for growing tea? Chai-land.

**_What is a ghost pirate’s favorite kind of tea? Boo tea.

**_Why should you always bring your own cup to a spy’s tea party? Their cups are always chipped.

**_Why do the cows return from the fields right when evening tea is ready? It’s the tea-pot calling the cattle back.

**_What do you call a man who dips biscuits into his cup of tea? Duncan.

**_Why did Karl Marx dislike Earl Grey tea? Because all proper-tea is theft.

**_What tea makes you original? Novel-tea.

**_How did the loving cup of tea greet his wife every day? “Hello, brew-tea-full!”

Using the puns are guarantee to make other people smile. Therefore, if you need all the tea-related puns and jokes, they are all above. You can just copy everything easily. This way, making the tea puns are going to be easier than ever.

170 Fun Ice Breaker Questions to Get Your Team Talking