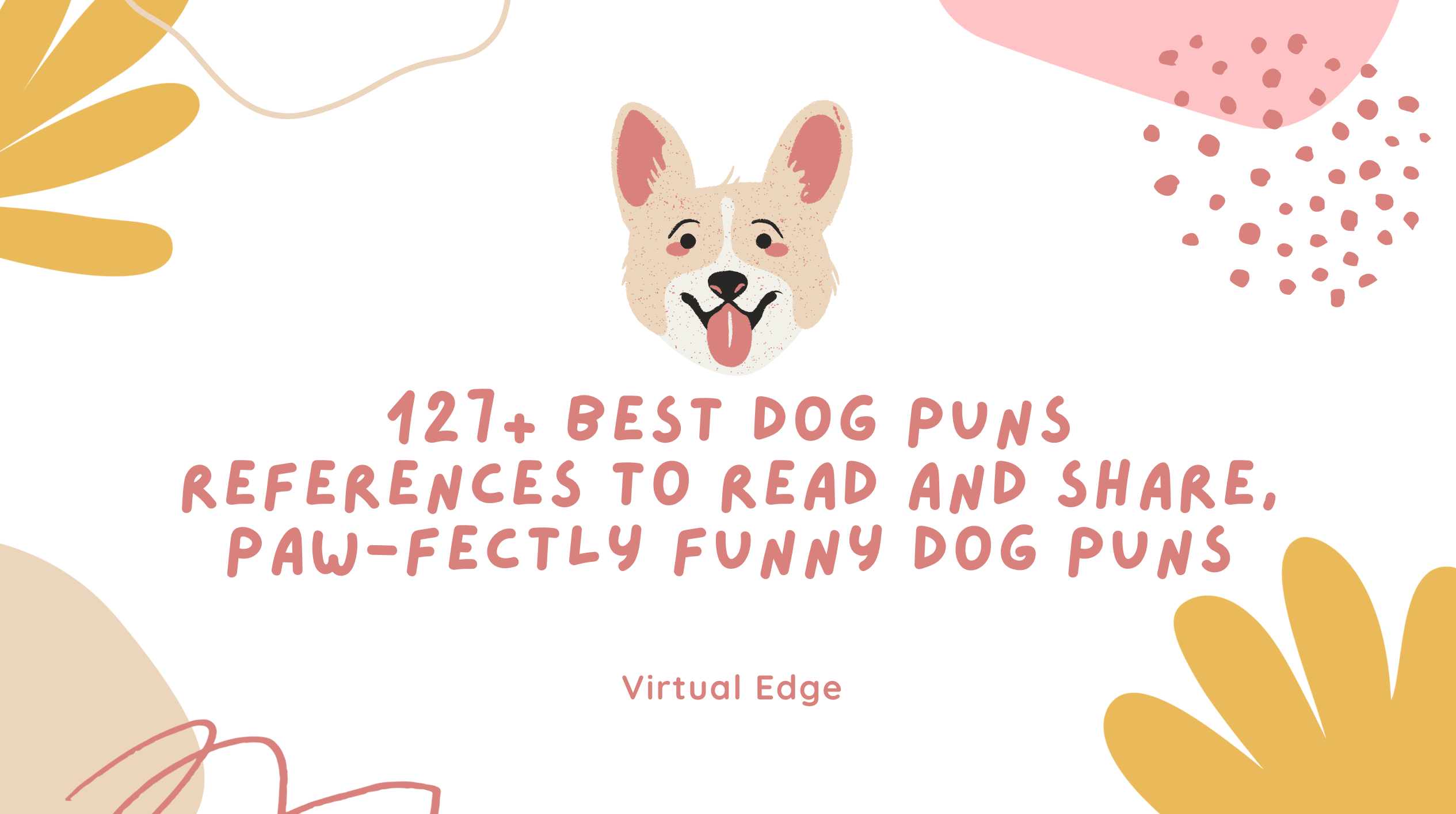 Playing and cuddling with cute dog is fun and all, but do you know what’s as much as fun as those? It is to read and share hilarious dog puns to people that love these cute canine animals as much as you do. Discover various amusing dog puns phrases in this article.

Dogs have many benefits for their owners. According to a study, 80% of dog owners live healthier physically and mentally than non-dog owners. They also pay fewer visits to doctors annually, regardless of age, gender, marital status, health-related factors, and income. Even those who don’t have dog as pet, there’s a supporting study that watching dog videos can decrease anxiety and stress – which explain a lot of why puppy and cat videos are so popular on internet.

If you want to learn more about dogs, read some fun facts about them below.

Whether you are trying to break the ice by sharing jokes, want to put amusing Instagram captions on your dogs’ photos, or want to cheer up a fellow dog lover, these dog puns can help. Take a look below and pick which one is your favorite.

The list below is put together in order to provide you with witty jokes such as dog walking puns. Not only they are hilarious, they’re also easy to tell and remember. Reading and sharing these will brighten up your day and anyone who hear them.

**_Anything is paw-sible when you have a dog.

**_When a problem comes along, you must Whippet.

**_Just need a cup of earl greyhound tea every day.

**_The Dalmatian hid from people because he didn’t want to be spotted.

**_You won’t find what you need here. You’re barking up the wrong tree.

**_My dog’s favorite band is The Beagles.

**_The dog catcher liked to sing while he picked up strays, “You ain’t nothing but a pound dog.”

**_What dog does Dracula own? A blood-hound.

**_That dog is so beautiful. She should be on the cover of Vanity Fur.

**_Don’t stop retrieving. Hold on to that feline.

**_Have you heard about the new dog movie? It’s called Jurassic Bark.

**_What kind of construction are dogs best at? Roofing.

**_What does a dog like to eat for breakfast? Woofles.

**_Dachshunds always nap in the shade because they don’t like being hot dogs.

**_Dogs are the most loyal creatures on earth – completely devoted to their dog-ma and paw.

**_Howl I ever live without you?

**_People who hate dogs are re-pug-nant.

**_I’m so paw-ssionate about dogs!

**_Don’t bite the hound that feeds you.

**_This place seems so fur-miliar.

**_You have the corg-key to my heart.

**_The dog has been going through a rough pooch lately.

**_Next time you take your dog out to the lake, bring a doggie paddle with you!

**_The newest Avenger is a dog named is labro-thor.

**_What does the dog eat at the movies? Pupcorn!

**_The dog barked all night without any paws.

**_The dog was so smart it majored in bark-eology.

**_It’s raining cats and dogs. That’s fine, as long as it doesn’t reindeer.

**_What’s your dog’s favorite Pink Floyd album? Bark Side of the Moon.

**_I love walking my neighbor’s dog. It’s the leashed I can do.

**_Mistakes happen. No need to terrier-self up about it.

**_Don’t drop snacks on the floor on game day—you don’t want to end up with a wide retriever!

**_My dog hates the rain. He doesn’t want to step in a poodle.

**_My dog never stands up for herself. She just rolls over.

**_The dog is so popular that the pup-arazzi took its photo.

**_I nearly kicked my dog out. But we renegotiated the terms of his leash.

**_Where do dogs go after their tails fall off? The re-tail store.

Puppy Puns to Share on Text and to Put on Captions

Look no more if you’re searching for puns about dog. This curated list contains various jokes, like New Year, Halloween and Christmas dog puns. These clever puns are perfect to put up there with an Instagram post of your adorable and cute pup photo.

**_My labrador always makes me happy after a ruff day.

**_My favorite dish is collar greens

**_We’re having labrad-oodles of fun.

**_The dog’s favorite pattern is houndstooth.

**_My dog likes to get paw-litical.

**_Dalmatians hide so you don’t spot them.

**_The Dachsund jumped into the pool because he was a hot dog.

**_My dog had to take out student bones to get his pedigree.

**_Do you prefer ice cream or pup-cicles?

**_A vampire’s favorite dog is a bloodhound.

**_Time for a manicure and paw-dicure

**_I love camping with my dog because she’s great at ruffing it.

**_I was late for work because I lost my corgi-s.

**_The chihuahua is tiny but fur-ocious.

**_Stop and paw-nder the meaning of life

Dog Jokes and Puns to Make You Smile

Dogs are the topic that’s not entirely rare to show up when people tell jokes and stories, so it’s not weird that the internet has so many puns about them. Feel free to steal and use these jokes to tell to other people and add some little joy to their day by making them laugh.

**_The Dachshund had to sit in the shade because it was a hot dog.

**_Which dog breed do vampires have? Bloodhounds!

**_What did the chicken, spaniel, and maltese cross-breed say every morning? Cockerpoodledoo!

**_Heard about the doggo fur hire for kiddies’ parties? He is a Labracadabrador!

**_What is the current special at the pet store? Buy 2, get the cheapest for flea!

**_Who is the famous doggy boy band that sings Hotel Collie-fornia? The Beagles!

**_What did the one dog say to his friend, when they saw a chubby female dog in the street? I like big mutts and I cannot lie!

**_When you leave your girlfriend at home because the sign outside the mall says: “No dogs allowed”

**_You can’t go outside because it’s raining cats and dogs!

**_Heard about the dog that was lying? He told too many tall tails!

**_What did Lady say to The Tramp? I am mutts about chew!

**_Why did the Cocker Spaniel have to sit in the shade? It was a hot dog!

**_What did the vet say to the dog owner? She is one sick puppy!

**_What do you call the dog president’s wife? The fur-st lady!

**_What fuel does a doggie car run on? Pet-rol!

**_Why did the Yorkshire Terrier go to the dogtor? Her voice was a bit husky!

**_What did the dog say to its owner? Stop yanking my chain!

**_What food does a dog enjoy that lives in India? Mutt-on Curry!

**_What is a dog’s first love called? Puppy love!

**_Why did the Alsatian go to the bank? He had to de-paw-sit some money into his account.

**_What is the fa-fur-ite shoe brand of Kim Kardaschund? Jimmy Chews!

**_What do you call a dog that does excavation in the garden? A Barkeologist!

**_Which job title is best suited to dogs? A roofing constructor!

**_Why did the mongrel start a dogfight? He had a bone to pick with the neighborhood bully!

**_What is Lassie’s favorite meal to chow? Wait for it… Collie-flower and rice!

**_How do you know a good dog pun from a bad dog pun? The good ones make you bark with laughter!

**_What happened to the dog who gave birth on the side of the road? She was ticketed for littering!

**_What’s better than a spelling bee? A talking dog!

**_What did the dog say when he went to the dentist? “I think one of my canines is getting loose!”

**_What do dogs eat at the movies? Pup-eroni pizza and pup-corn!

**_Where do dogs go when their tail falls off? The re-tail store.

**_How are we doing with these dog puns? Some of them are ruff. But a few of them have pet-tential!

**_What did the Dalmatian say after eating dessert? “Man, that really hit the spot!”

**_Do you think he’s a bad dog? No, but he is a little ruff around the edges.

**_Why did the mongrel start a dogfight? He had a bone to pick with the neighborhood bully!

**_What’s a dog’s favorite activity to do in school? Lab reports!

**_What did the dog say to his nagging boss? I told you I’d get it done on time, quit hounding me!

**_What did the celebrity dog say when someone took his photo? “Sorry, no pup-arazzi please!”

There are many forms that you can find funny dog puns. Some are simple; some are smart, while some stay corny – as how puns mostly are. Regardless, they might be able to lift the mood and prompt a smile and laugh that you and other people need for the day.

How Will Virtual Events Impact the Evolution of Live Events