105 Best Eye Puns and Jokes That Are Cornea 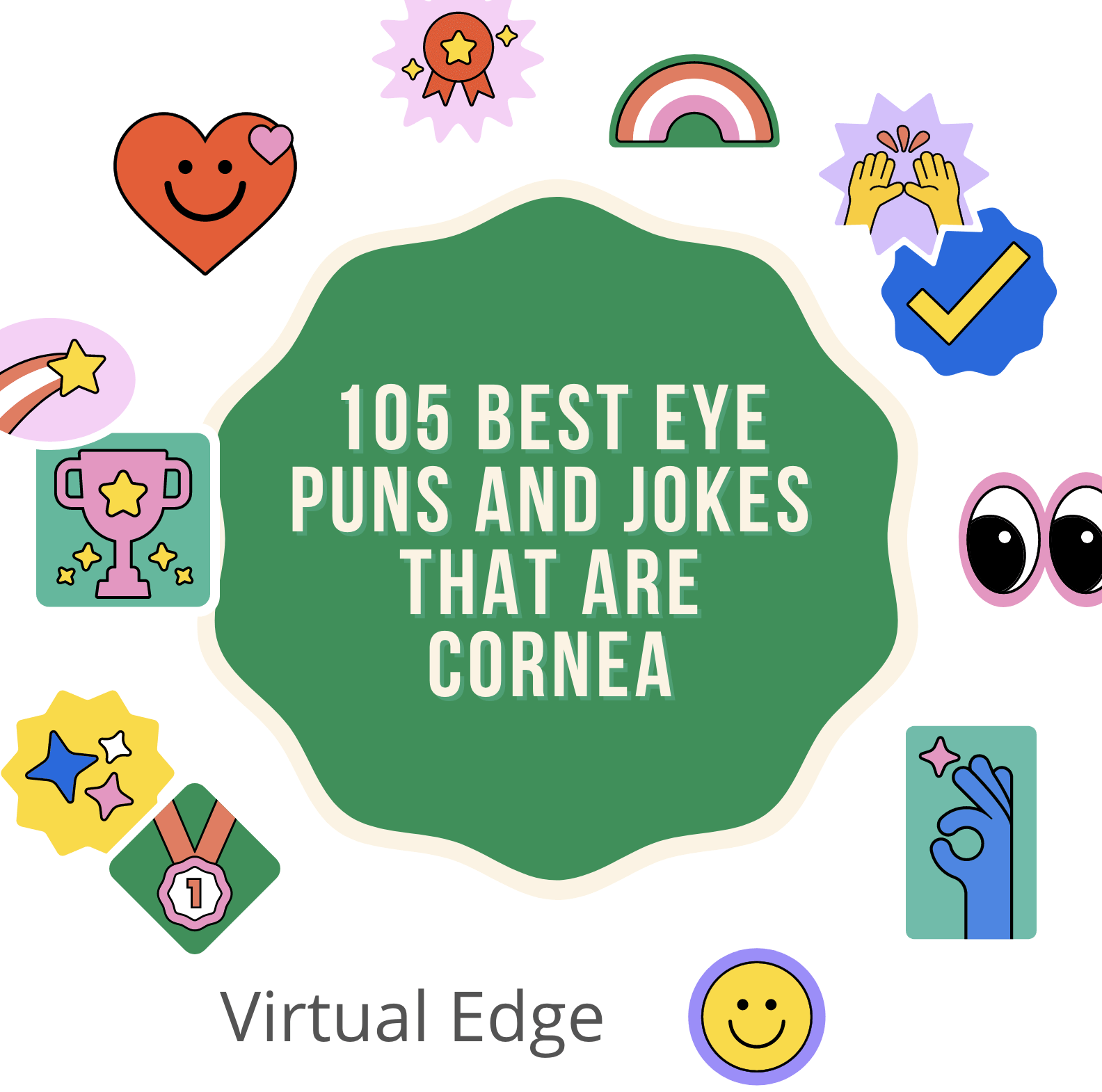 Ever heard of eye puns? Although it is quite strange to have one of the most important organs as puns, in fact—there are people who keep making it. If you are looking for something funny, eye puns can be that fun friend to laugh over. What’s good is, you can find eye puns in many resources despite its somehow bizarre jokes.

Puns are somehow an already-old ‘language game’, and it does not take one or two centuries only to trace back its history. Mayans, which had their significance circa the 14th to 15th century in the area of South America, also had their version of playing with language.

Unfortunately, there are no facts saying the data about eyeball puns. It just turns out that eye as our vital organ has this potential to become an object of wittily composed humor. Composing your own humor may be a bit difficult for some people—you know, everyone’s ‘humor skill’ is different. So, it’s no wonder to have articles after articles that talk about puns. Because, who knows you’ll need it to crack the ice during a class, or during a hard conversation between your own family?

Well, there are other benefits you can get by browsing eye puns. Some of them will be shown as follows:

Funny Eye Puns to Laugh Over with Friends

Aside from watching comedy shows, you can rely on some puns to bring you a good laugh. Why so? Puns are relatively short, and most of them have no more than two sentences. So, it’s a good and fast boost of comedy. You may have people to entertain, but you can’t do it yourself. Grabbing some puns to entertain them will be a great and quick way to have them laugh.

**_The phone wears a pair of glasses because it has just lost all of its contact.

**_Eye doctors are the best ones because they used to be good pupils at school and university.

**_What is the most favourite musical group of eyes? – The Black Eyed Peas.

**_The eye teacher quits her job because she cannot control her pupils.

**_The eyeball can learn everything at school so quickly because it has an eye IQ.

**_What would make our eyes feel lonely? Eye – solation.

**_During the exam period, all optometry students drink a lot because they believe that alcoholic beverages could double their vision.

**_The teacher has to wear sunglasses just because his students are so bright.

**_Eyes actually do not like wearing glasses because they keep asking to lens some money.

**_The easiest way for a dictator to take a globe is to have a contact lens.

**_When the lens is stopped by the police officer for exceeding the speed, it makes an excuse: “Excuse me sir, but I have been framed for the whole time!”

**_Garbage men have a special form of vision. It is called bin-ocular vision.

**_The eye doctor is so angry with his daughter because he thinks that she is making a spectacle of herself.

**_What does the eye say once it finally has a new pair of glasses? “Eye am back!

**_Hey girl! Your eyes are as blue as the ocean, and I get lost myself at see.

**_You would know that eyes are trying to flirt with you when they are going: wink, wink!

**_The vision can come up with an approximate estimate by eyeballing it.

**_Eye doctors and teachers are similar because they all love testing pupils.

**_To become a successful eyewear designer, what you need are an eye for the latest st-eye-l.

**_What does the blonde say to the contact lenses? – “I cannot take my eyes off you!”

**_Men always find it hard to make eye contact simply because breasts do not have eyes.

**_Do you know the alien that misses one eye? It is called Alen!

**_A fish without eyes is also called a fsh.

**_What does your left eye say to your right eye? – “You are looking alright!”

**_When the retina begins to cry, you will end up with having retinal tears.

**_Which game does a frame love playing the most? – Tag

**_Do you know where the eye is located? Somewhere between H and J.

**_The eyelid and eyebrow always fight. They would never see each other eye to eye.

**_They optometrist wants to visit the beach because she hears that there was plenty of eye candy.

**_What does the potato tell his girlfriend? – “Would you tell me more about my beautiful eyes?”

**_A great pick-up line for far-sighted people: “Hey beautiful girl, eye can see you in my future!”

**_Your eye pun is so bad that there is no need to lash out.

**_Which type of humour does an optometrist like the most? – It must be eye – rony!

**_Which have up to 4 eyes but cannot see anything? – Mississippi!

**_The kid says to his mother: “Mom, I lost my contact lens!” The mother replies: “I already told you to keep your eye on them!”

**_Eyes are undoubtedly the most efficient part of our body because they always focus on what matters.

**_”Bad puns are how eye roll,” said the optometrist to his annoyed patient.

**_”Eye’m loving it!” the eye doctor squealed when he had his first McDonald’s.

**_An optometrist’s students are actually his pupils.

**_The pirate married his eye doctor because it was an eye-deal relationship.

**_The optometrist was brought to court since he was the only eye-witness.

**_”Don’t peek while eyebrows my feed,” said the eye doctor to her nosy friend.

**_The optometrist listens to her favorite music on eye-tunes.

**_When the cops failed to solve the difficult optometrist murder case, they closed the lid on it.

**_The optometrist shared his playlist with his friend via eye-tunes.

**_”Iris my case,” said the eye medic to the judge when he was asked to testify in court.

**_An optometrist’s favorite gadget to use is an eye-watch.

**_I went to an optimistic optometrist yesterday. He told me that my glasses were half full.

**_In Heinz-sight, smearing ketchup on himself was a terrible idea.

**_The optometrist refused to learn any eye jokes. He did not want to break the eyes.

**_The eye medic loves to visit the playground because she likes riding the see-saw.

**_The eye doctor always takes the elevator. He hates the stares.

**_The eye doctor easily passed his eye exam because of his high Eye-Q.

**_I went to a new eye doctor today and he was too narcissistic. After all, what could I have expected from an I-expert?

**_The optometrist lost most of his patients because he wouldn’t stop cracking cornea puns!

**_An optometrist’s child is without a doubt the apple of their eyes.

**_An eye doctor who is obsessed with Apple products is called an iDoctor.

**_I just saw a cashier scan the eyes of a rude customer with her barcode reader. The look on his face was priceless.

**_Do you know the alien that misses one eye? It is called Alen!

**_After the training accident that cost York an eye, Carolina waits at his bedside for him to wake up.

**_When you’re with your cross-eyed friend, do you ever wonder if they’re seeing someone else?

**_Sometimes when i close my eyes i can’t see

**_As I handed my dad his 50th birthday card, he looked at me with tears in his eyes and said You know, one would have been enough.

**_What did the eyeball say when it tasted cheesecake? That’s too eye for!

**_To become a successful eyewear designer, what you need is an eye for the latest st-eye-l.

**_Did you hear about the optometrist who fell into a lens grinder and made a spectacle of himself?

**_What did the right eye say to the left eye? “Between you and me, there’s something that smells.”

**_I wear glasses during my math exams because they help with my di-vision.

**_When the police officer had arrested the Thug Glasses for robbing a bank, he exclaimed: “Sir, I have been framed!”

**_It was clear that the optometrist loved his patient. Every time, she left his office, he handed her a bottle of contact solution and said, “Eye care for you.”

**_The teacher wore her sunglasses to work because she had such bright students in her class.

**_The eyes thought they looked exceptionally good when they wore glasses.

**_The man vowed to find the thief who stole his glasses. He had contacts.

**_Boxers cannot wear glasses in the ring when fighting, because it is a contact sport.

**_The cellphone started wearing glasses after he lost all of his contacts.

**_Sometimes I feel like taking off my glasses. I am tired of seeing things.

**_The woman wore her glasses when she slept at night because she wanted to see her dreams more clearly.

**_I have no idea what to do after I get a pair of glasses. I have to wait and see.

**_The 18-year-old refused to take off his old glasses since he was waiting for adult super-vision.

**_The live streamer refused to wear glasses during his video because he was doing a blind run.

**_Since I did not like the frame samples in the store, getting them custom-eyes-ed seemed like the best option.

**_Getting glasses has taught me a lot. I am seeing things more clearly now.

**_Contact lenses are much better than glasses, at least, in my eyes.

**_The careless lady keeps losing her contact lenses. She is just unable to keep her eye on them.

**_The eyes refused to talk to the glasses because they wanted to contact lenses.

**_The man bought four new pairs of glasses for the cost of two. He thought the purchase was eye-deal.

**_The new girl suddenly become the new talk of the class after she made a spectacle of herself in front of the whole school.

Want to start your own pun? You can start by having some funny eye puns to guide you while ‘starting your journey’ to become a comic. Without a sample, it’s hard to start making the joke with your own words. Jokes that entertain will be greater if accepted universally, and that’s why you ought to find your puns sample first.

**_I my eyes You are a quite spectacular.

**_Sometimes all you need is a new perspective.

**_Everyone has two eyes, but no one has the same view.

**_Eye wonder what I look like in your eyes.

**_My eyes are ocean in which my dreams are reflected.

If you need some eye puns to ‘heal’ yourself, or to entertain others, that’ll be a great idea to find a source with lots of puns in it. Well, actually, you’re already here—don’t hesitate to scroll down for some eye puns inspirations.

100 Powerful Karma Quotes to Inspire Positivity in Your Life